The 13 existed instalments make already my blood boil and my pulse race!


In spite of the fact that the first book in the series was published in 1981(??!!), it is such a refreshing and surprisingly very up-to-date read! I don't know why I have never heard about Donald Strachey before, because a few instalments have already been made into a TV-film with Chad Allen in the main role. Yes, it is him. 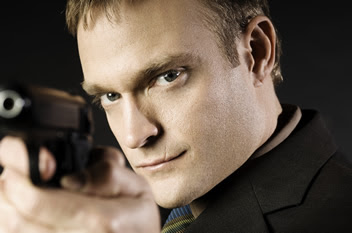 The plot of the first book reminded me in some way of Nick Nowak series. Don is also an openly gay PI with a dry humour that makes the first person POVs to a very enjoyable read in spite of serious and sad moments(homophobia all around, awful but true!).
An interesting view to a gay lifestyle in a gay society before the Aids epidemic in the early 1980s, entertaining characters, intrigues, sex, good thought out mystery, Don and his relationship with his faithful companion (and unfaithful lover) Timmy, a clever and funny writing- all that make me want to read more!

Highly recommended to all fans of a gay mystery!

This book was already for a while on my TBR but every time I looked at this cover...

Who can tell me what this dog is doing there? If a cover can discourage potential readers, then it is the best example. JUST IGNORE IT!
Tweet